Butterflies is a movement from one-act ballet, Dear Frances, which was created in 2019 in collaboration with choreographer Ruaidhri Maguire. Scored for varying instrumentation from chamber orchestra to solo piano, the work explores themes of mental health and consent through the life of Frances Shea, the young 1960's woman who became the wife of London gangster, Reggie Kray.

A pas de deux performed by Frances and Reggie on their first meeting, the piece is inspired by footage of butterflies in flight. An intimate moment in the piece, the timbre was essential to depict the character’s blossoming connection, using silvery harmonics and sul tasto techniques to create a brittle texture. The very delicate lilting opening is reminiscent of the fluttering wings, to portray the hesitancy and nervousness of teenage Frances as she is submerged in Reggie’s world. The main theme appears throughout the ballet, first representing Frances’s mental fragility through coming of age, later intensifying with the romance, and finally twisting as the relationship and her mental health decays. 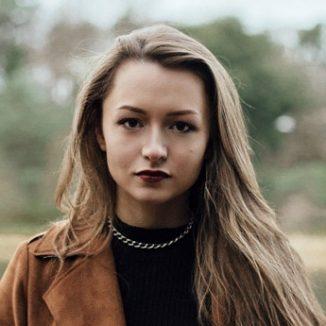 Hailing from Northern Ireland, Amelia navigates potent contemporary social issues in her music, juxtaposing classical and folk elements in her creative process. Her work has been performed at UK events and venues including the Southbank Centre, the Presteigne, Leeds Lieder and Herne Hill festivals and broadcast on BBC Radio 3. Recently, she completed a commission from the Central Band of the Royal Air Force called A Picture on the Wall and a trio for performance by the New Woods Collective at the European Clarinet Festival. August 2020 saw the premiere of ‘Through His Gaze’ at Presteigne Digital, a song-set for tenor and harp commissioned by the festival.

Following the premiere of her ballet Dear Frances (2019) choreographed by Ruaidhri Maguire, Amelia is currently collaborating with the choreographer on a new ballet based on the forming of The Peace People in 1970s violence-torn Belfast for performance in 2021. Other current work includes a new music-theatre piece based on the Magdalene Laundries in collaboration with writer Laura O’Connor, and a new vocal work based on evidence from the 2018 Belfast Rape Trial.

In 2019, Amelia received her Masters in Composition with distinction from Trinity Laban as a Trinity College London Scholar and with the generous support of the RVW Trust under Deirdre Gribbin, Errollyn Wallen, Ed Jessen and John Ashton Thomas. Amelia was honoured to receive the Musician’s Company medal for the college, becoming the only female composer on the Company’s esteemed Yeomen Young Artist scheme.